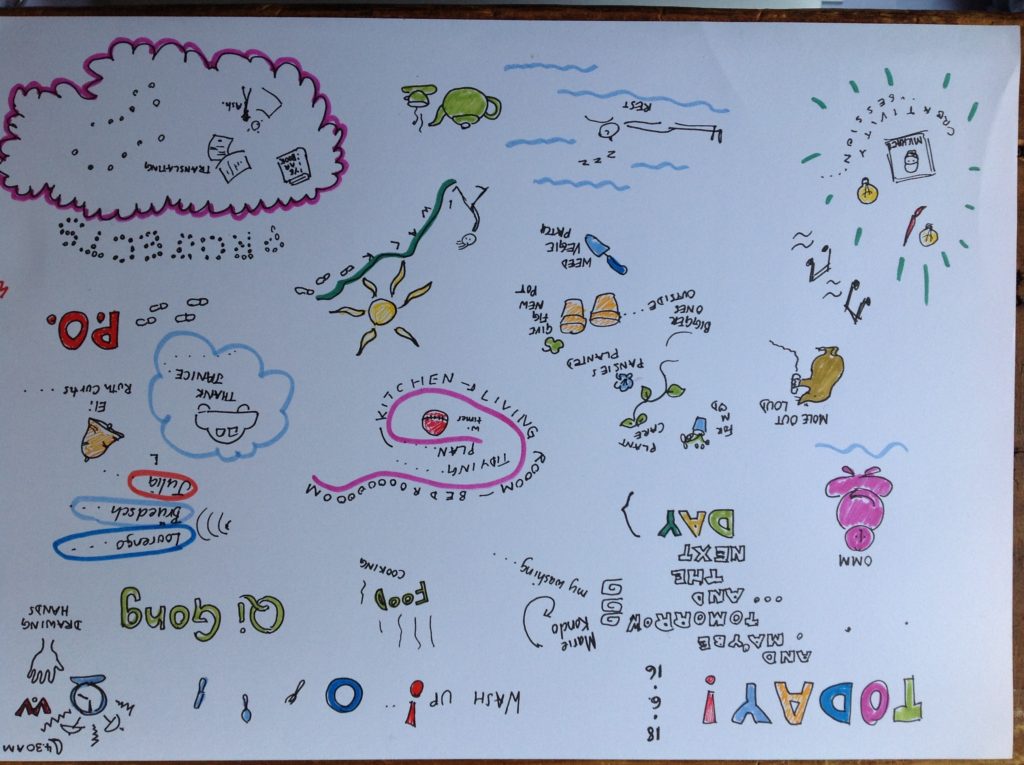 A lovely day of unwinding after a hectic week and a ‘What Would You Like To Do’ drawing instead of a ‘To Do’ list.

Tante Mole’s companion, Mathilde, made decisions – just like that. She held no truck with the ins and the outs of a thing, and appeared never to suffer regret once a decision had been finalised. She was a terrifying creature who still haunts me in wig and gown, casting judgement in recurrent courtroom dreams; dreams in which I am helplessly trapped in the dock. But, as Tante Mole never ceased to tell me, Mathilde’s decisions saved many lives. And yes, they may have been fast but that was because attached to a sharp mind were years of knowledge and experience.

Uncle Ratty just allowed decisions to happen – an apparently seamless transition from thought to action. It was as if there were never any dichotomy, no bicameral warring, no either or.

Great Uncle Mole could not have been more different; he was the Great Deliberator. If a decision had to be made he took a sheet of Quad Crown paper from the map cabinet and attached it to his drawing board. He would write the question to be decided in neat capitals at the top, underline it in red and then beneath it rule a vertical line down the centre. One side was entitled Pro and the other side Con. Sometimes he would just list the pros and cons, tally them up and accept what the numbers told him rather than fiddle about with qualitative detail. Sometimes he expanded his analysis with a timeline, projecting likely outcomes, one year, five years and ten years ahead.

This is all very well if a mole is contemplating moving continents, building an ark, or planning a train robbery, but the decisions I make are about scene sequences, paragraphs, sentences – occasionally just a single word. I fear putting pen to paper because once a word is written it has a presence. A sentence, paragraph or scene has even greater presence. It would be alright if I could contemplate this whole to perfection before committing it, but I can’t; so at some point I have to wrestle with changing what I have written. Changing occasionally means expanding, but much more often it involves replacing, or worse still, extinguishing, and it is I who has dominion over the words, who has to decide whether they are chosen; this mole (the one that so over-empathises with the material world that it holds its breath while washing a grape lest it drowns) that has responsibility for their fate.

Things that are not chosen continue to clamour, as I am sure I must have done as a small, wheezy foreign mole who was never chosen if ever a side or a team was selected. Mercifully, my school did not engage in sports so this did not often happen. The unchosen cast their shadows. There are more of them, than there are of those selected. They rumble just under the surface like a resentful Greek chorus.

There is of course an in-between option, when something has not yet been rejected, it just simply hasn’t been chosen, and perhaps one or other choice will just atrophy with time. It is the kind of approach that accords with the definition of politics cited by the post-war French prime minister, Henri Queuille, as the art of postponing decisions until they are no longer relevant. But prevarication weighs heavily, too; all those unmade choices clogging up the poor mole-mind.

Some say go with your immediate feeling – trust your gut, your first intuition, but I am so slow that my second thoughts turn up for dinner while my initial intuition is still wondering what it will have for breakfast.

But sometimes a decision is easier if it is thrown into the lap of the gods.

When the time came for a sibling and I to sort through the parental burrow we were overwhelmed both with a sense of intrusion and by the extent of it all: the papers, the cupboards and drawers and boxes and crates and shelves and desks and suitcases and trunks and cellars, and the piles that had accumulated in the fifty years the family had occupied the burrow. Where to begin? I picked up our late Papa’s divining rods to guide us towards a starting position. It twitched towards the parental bedroom, twitched again towards a pile covered with a large Indian embroidery. My sibling plucked the cloth away like a magician and there before us stood the biggest chocolate bunny we had ever seen. It was absurd, it was a license, it was a reward, and it gave us a place to begin.

And it reminds me now of my late Mama’s advice to toss a coin if I couldn’t decide. But that was worse than the original dilemma, having to choose between heads or tails would led me to paralysis. What if I chose the wrong one? It was only much later, long after I had left the burrow, that she pointed out that if I thought I had chosen the wrong side, it was a clear indication that the opposite decision was the right one.

Somehow I had always accepted that which ever side the coin fell sealed the fate of the decision. The idea that I could use my free will never entered my mind.

I have coins, and I still have the rods. It’s a slow process this writing when you have to rely on these instruments for every word you write. 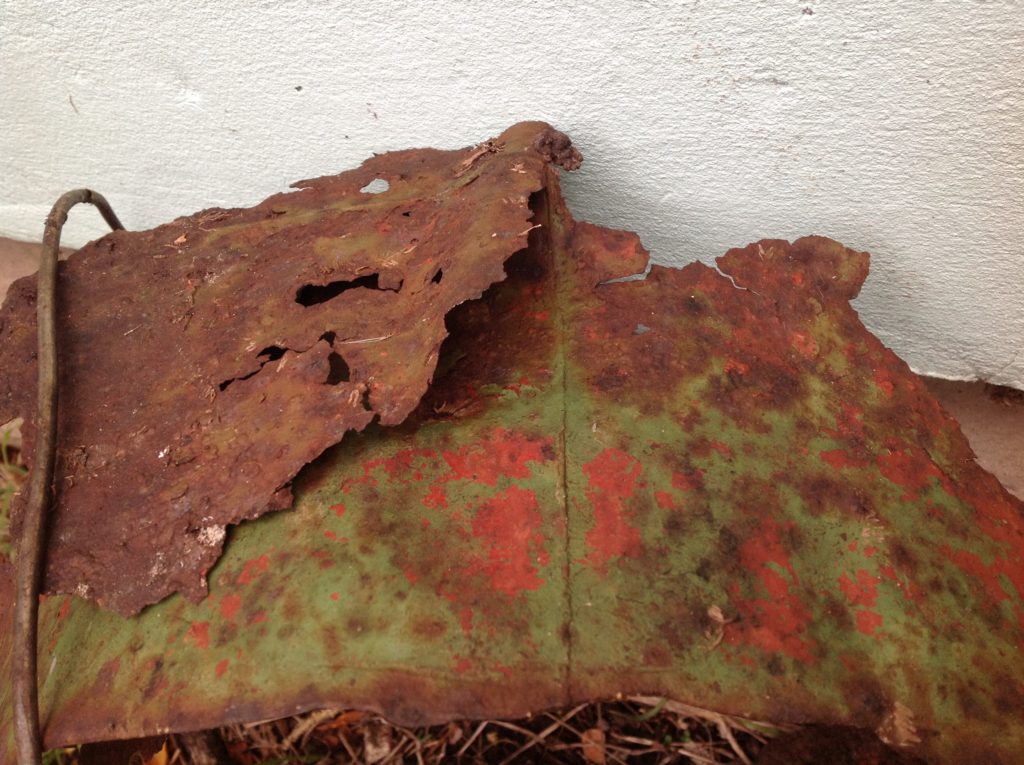 A little rest from delving into my creative tunnels. 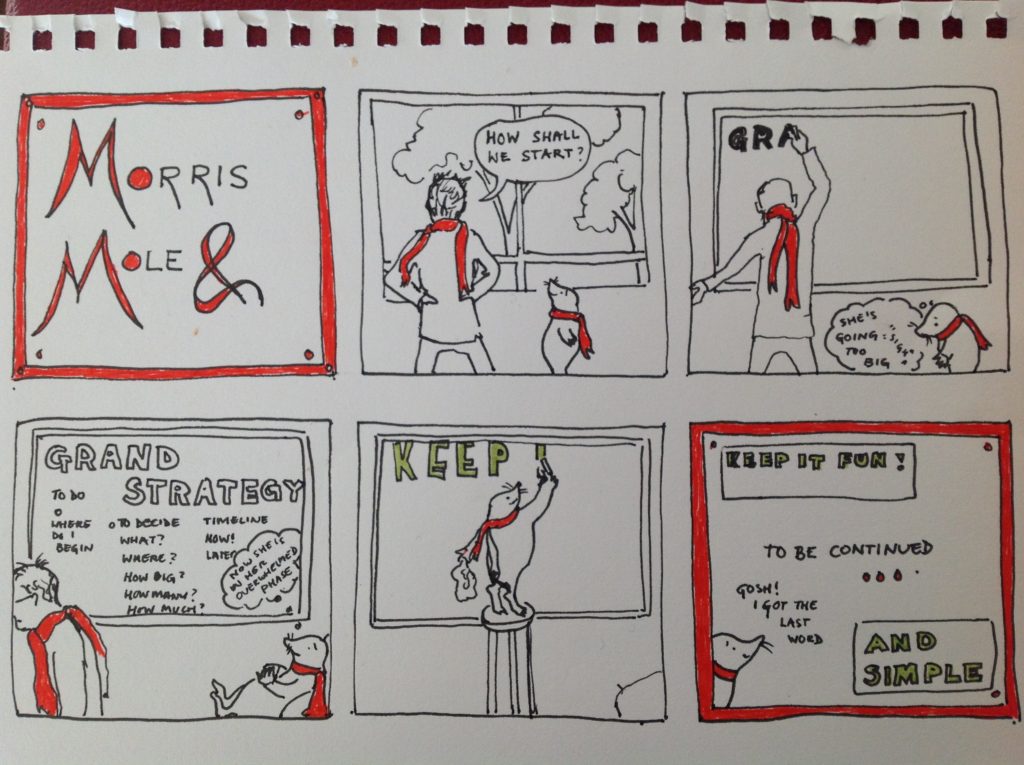 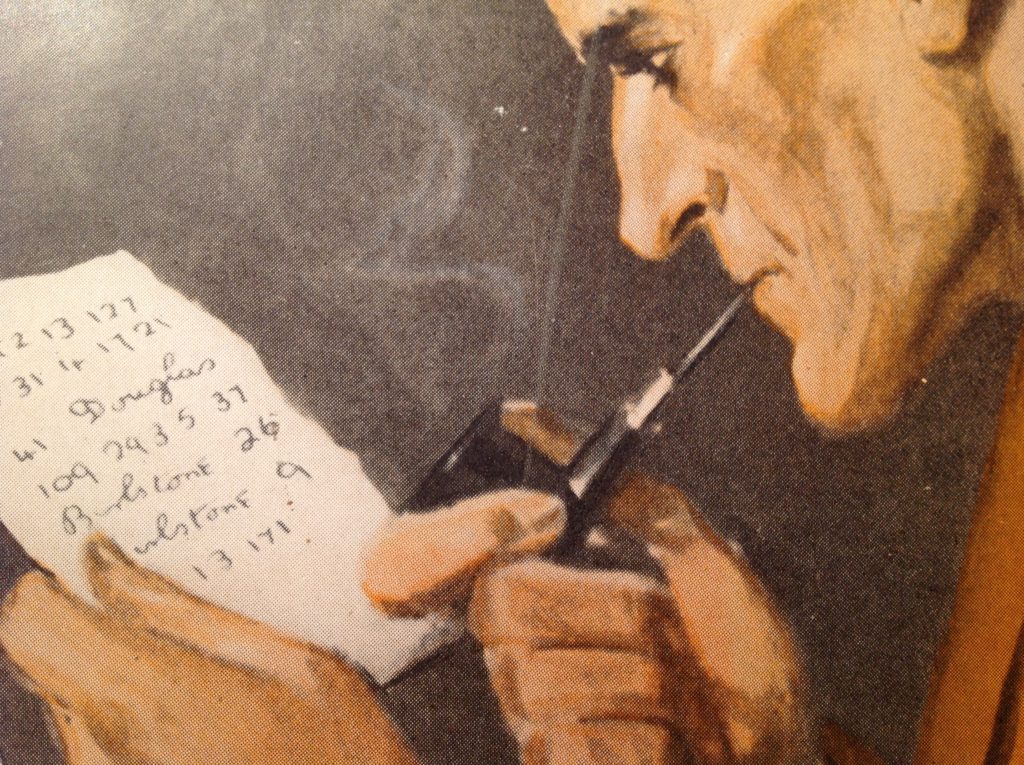 Deadline met. Taking a midweek breather from the keyboard and regirding for the next couple of days. 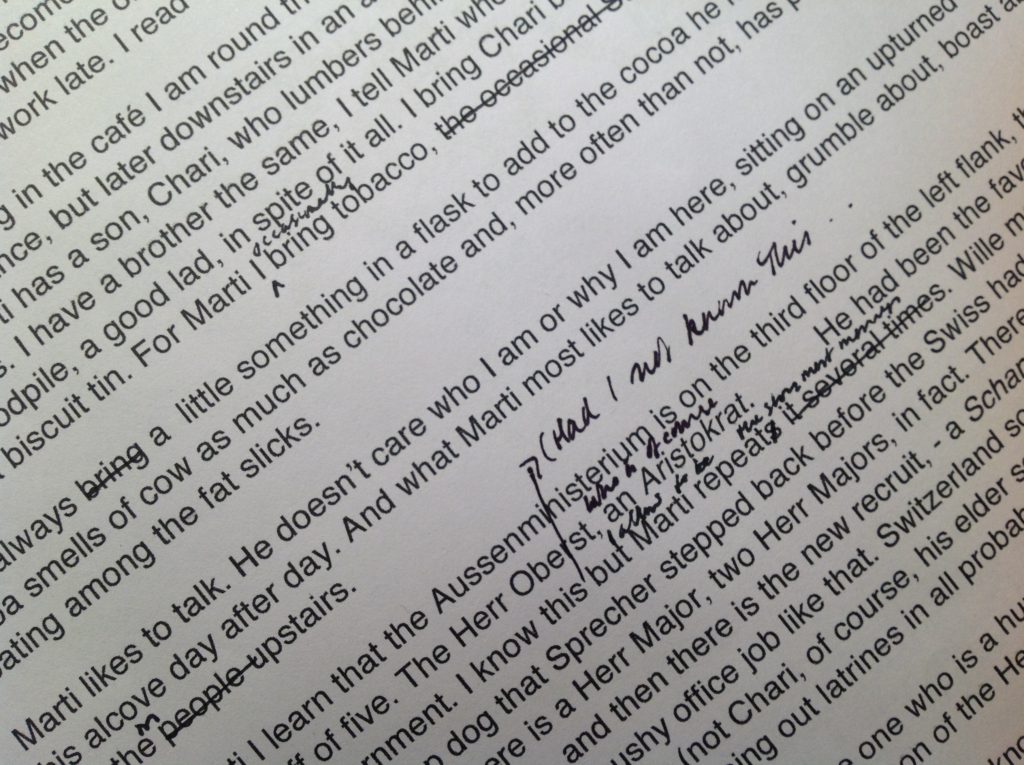 Deadline. Overslept, went for a walk, have been writing ever since. Great day! 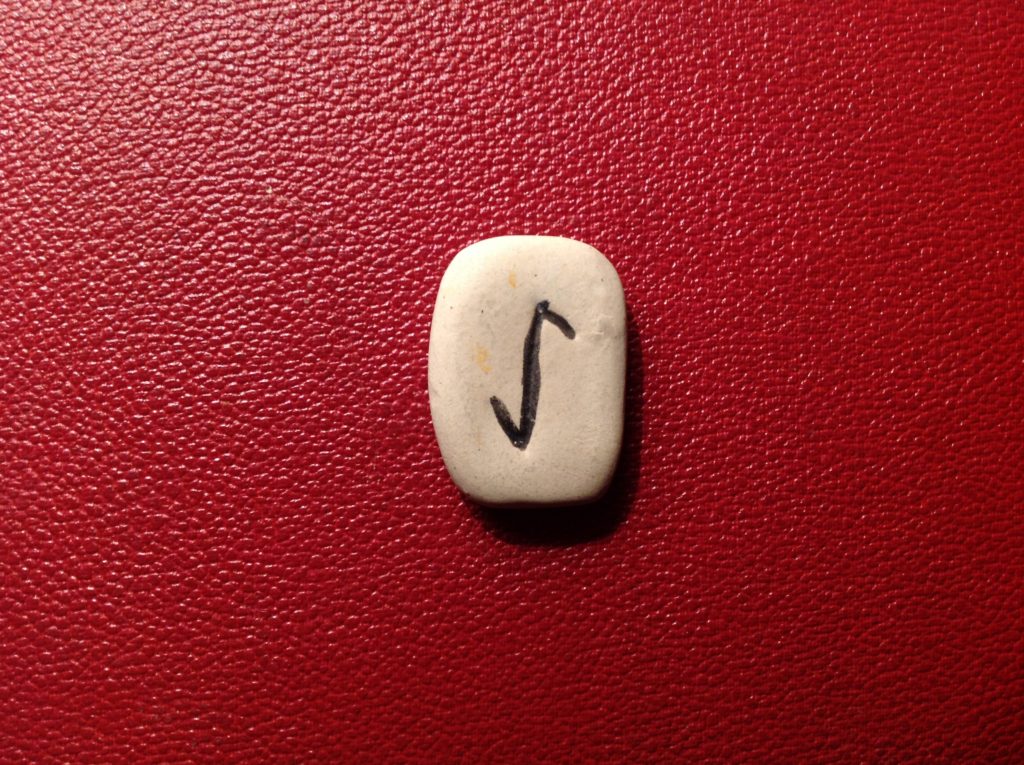 Pleasures and frustrations and the strange appearance of a rune.

Cosying up with Boo on a very cold day, a potato baking in the oven and a Creativity Session with Michael Nobbs to look forward to.

The other night I was awakened by a crash and a rumble, and in my rush to turn on the bedside lamp I knocked my spectacles off the trolley. I’m not sure why I woke up. Crashes and rumbles in the night are common as muck; the roof is a highway for possums. They drop from the kauri tree on to a spot just above my bedroom ceiling and then hurtle to the other side of the burrow where the wiring to my neighbour’s shed provides a useful swing onto the silver-birch. Had there been some fisticuffs as well? Was that why I woke up? I don’t know, but the long and the short of it is that having woken up I’d knocked my spectacles off their allotted spot and in spite of several minutes of groping I could not locate them again.

That is why, at some nameless hour in the middle of the night I could be found crouched on the floor, head-torch strapped on, and peering at the landscape beneath my bed. It has to be said that the torch was worse than useless in my unbespectacled state, but a coat-hanger succeeded in hooking – well quite an array of lost objects and detritus; my spectacles, too, rather enhanced by a soft furring of dust.

Something about the position I was in, the hooking, and the underbelly of the bed took me back to Great Uncle Mole’s parental burrow. Of course I hadn’t known it when he’d lived there in his youth, only as it was in mine when Pipsqueak lived there. Pipsqueak was the youngest of the brothers and had never left home; never grown up according to Great Uncle Mole who was the eldest.

As far as his attitude towards dust went, Pipsqueak might be described as the Quentin Crisp of the mole world. It is indeed hard to see a new coating of dust if the sediment already four inches thick. The dust in Pipsqueak’s burrow made a mystery of all objects and itself morphed into strange shapes that insinuated themselves into a young mole’s lungs and imagination.

Pipsqueak was quite old when I knew him, although not nearly as old as Great Uncle Mole – but he had about him a sense of child-like dreaminess. He could be found watching a snail or a raindrop or a cloud for hours on end – and the dust shapes were for him things to be wondered at, not swept away. Great Uncle Mole who regularly took round hampers, despaired of Pipsqueak and would keep our visits to half-an-hour or less and make sure we were wearing bandannas around our snouts. Their Mama, he said, was a burrow-proud mole and would have wrung her paws at the sight of the place. She had been born within tunnelling distance of what had once been the Great King’s Cross Dust Mountain that inspired Dicken’s Mutual Friend, and dust was something to be fought tooth and claw. I remember Great Uncle Mole musing once that it was a pity there wasn’t the same sort of money in dust as there had been then. Dust and ash and cinders were turned into bricks, broken crockery and oyster shells went into road-building, rags morphed into paper. The King’s Cross dust mountain was cleared to build the station and sold to Moscow for a fortune in 1848. Everything always became something else.

Sometimes it still does. Well it always does, of course, but there are times when it is done with great deliberation. The Granby Workshop makes terazzo mantlepieces from the rubble of derelict houses in a way that honours the lives of the previous inhabitants. Catherine Bertola makes carpets of dust. Paul Hazelton takes dust to craft a woman scrubbing woman scrubbing. Jim Dinglian searches out discarded bottles by the roadside and old silver-plated tea-trays. He blackens them with candle smoke and creates images by working away at the soot. James Croak sweeps up gutters in Brooklyn to build his dirt men, and Jim Bachor fills potholes with mosaics.

I had no sense of it when I was a youngster visiting Pipsqueak with Great Uncle Mole, but now it comforts me that things crumble to dust and are then brought into being again.

Enjoying trying to encapsulate a life in one page.