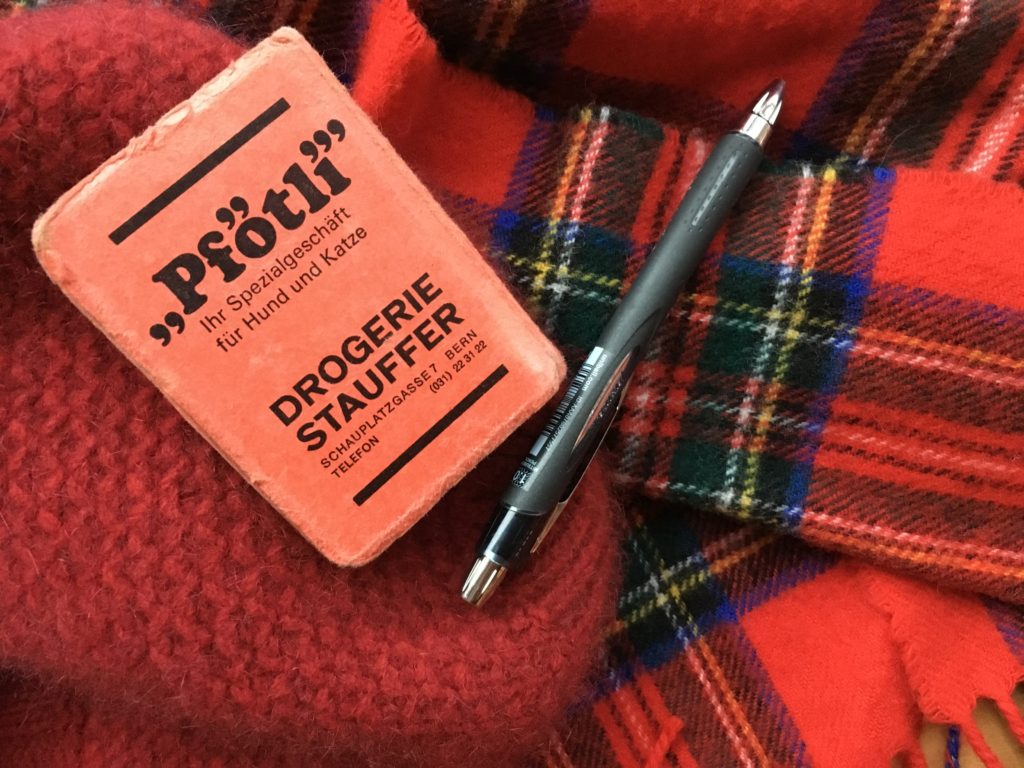 Walking with a notebook on a heavy grey day and enjoying this midwinter. 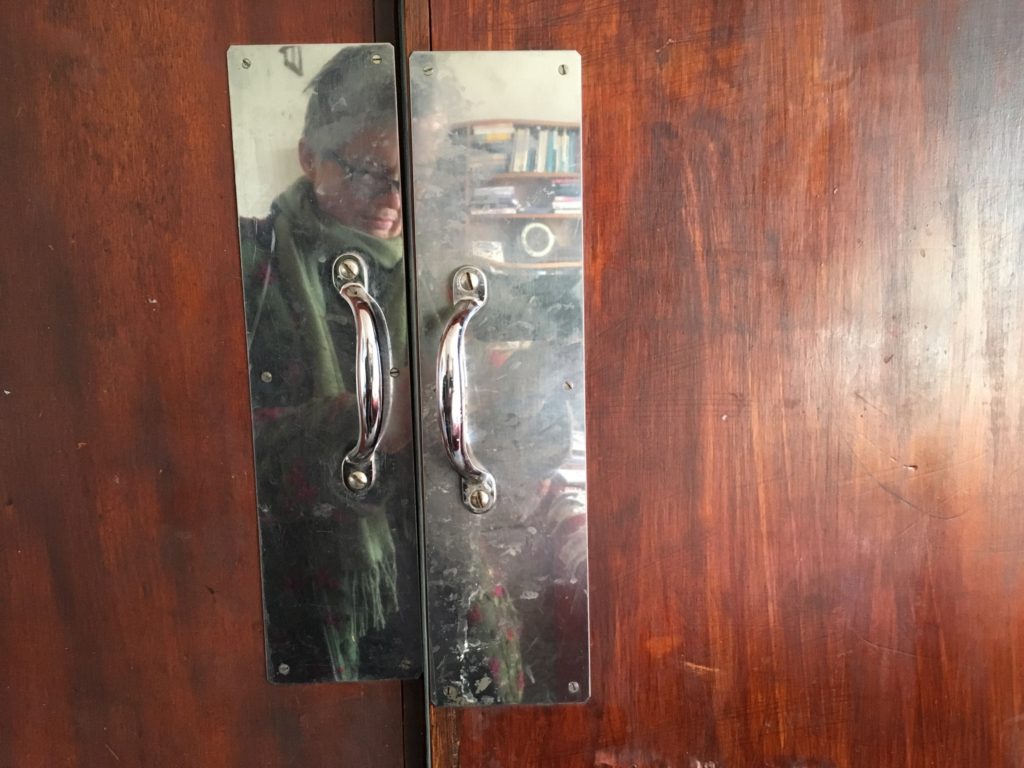 Mulling about the latest sunrise, being halfway through the year and my changing approaches to planning and reviews. 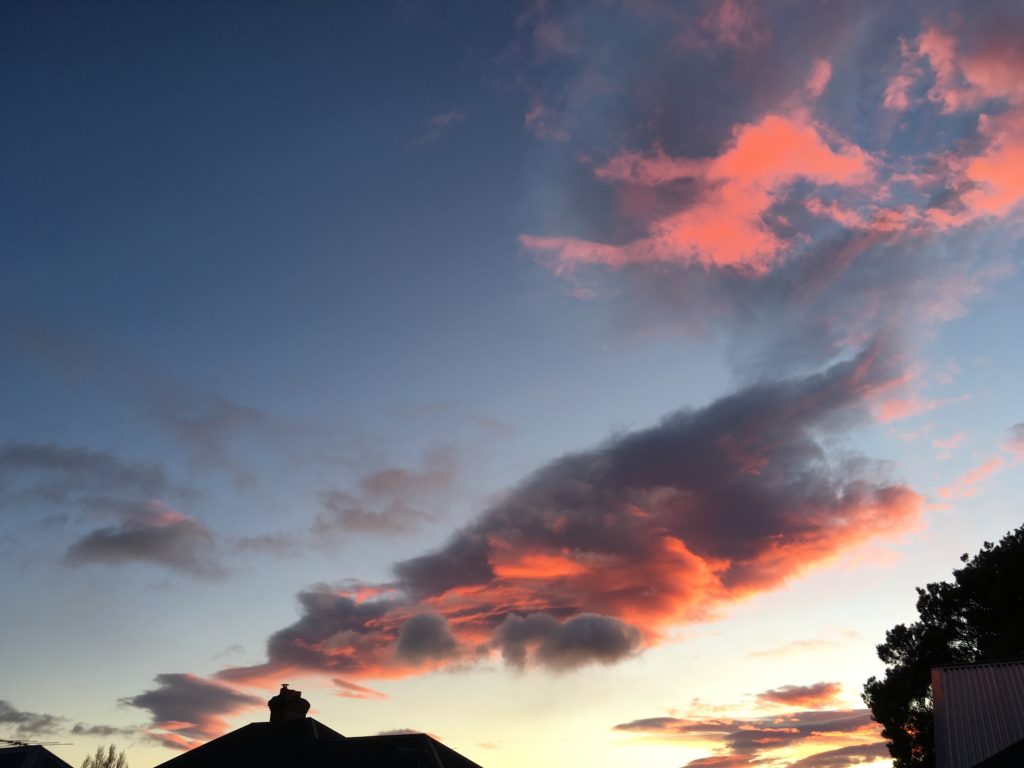 Restoring myself with drawing and walking at the end of the day and clearing my head of technology. 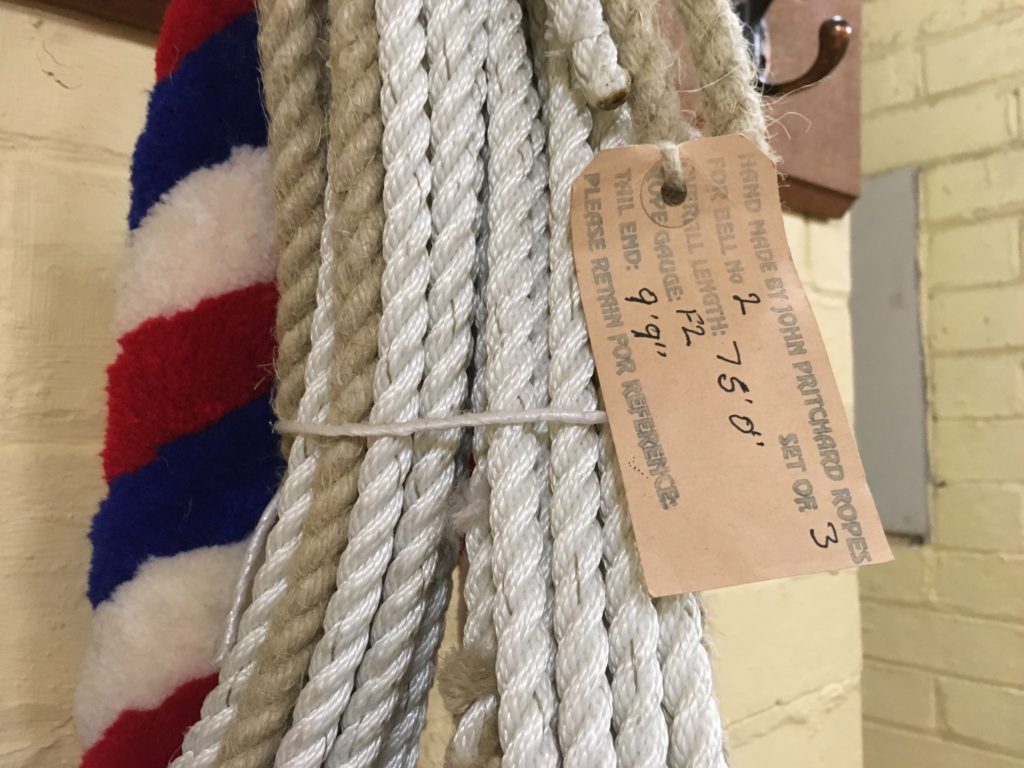 Sitting in the belltower after a re-energising Qi Gong class and reflecting on a day of translation. 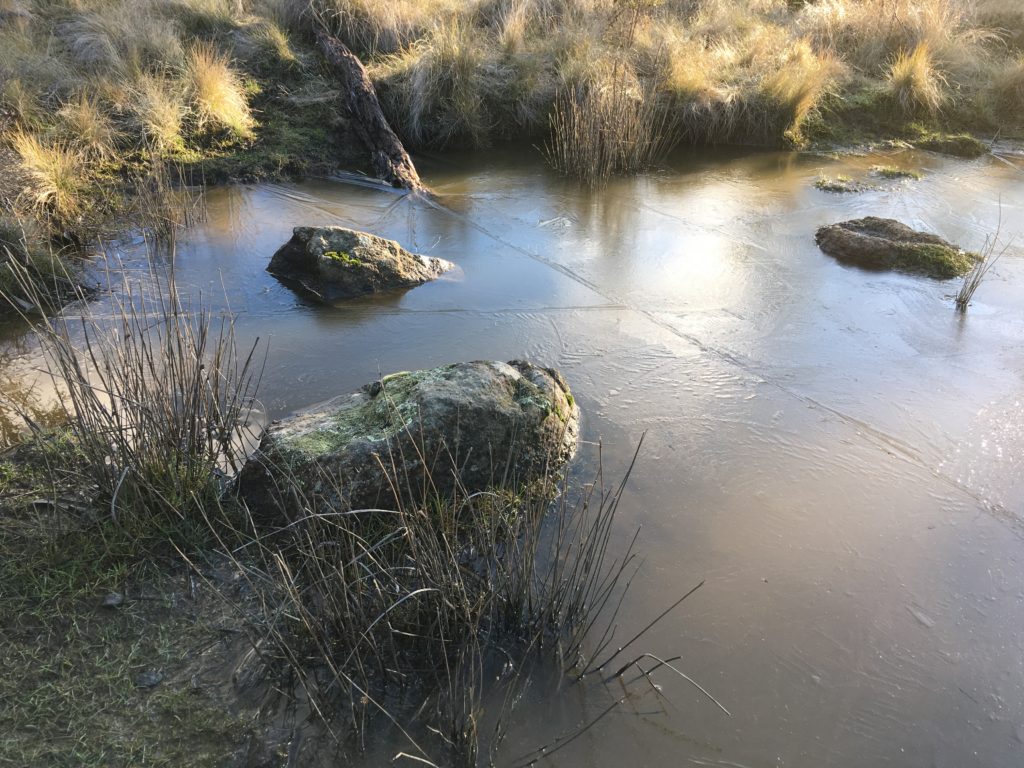 A very short night, a gentle day: walking, drawing and catching the last of the sun.

A couple of weeks ago I mentioned that I had been to the cellar to bring up Mathilde’s draught excluders and, incidentally The Compleat Housewife. As I mentioned then, the latter distracted me from my original purpose and I spent the afternoon on my ill-fated bread and butter pudding.

The excluders remained untouched in their folded state under my desk. But yesterday there was a further drop in temperature and I could no longer procrastinate in comfort. I was reading a newspaper when the draft caught me in the kidneys. I considered briefly wrapping the sports section round my midriff like the stallholders at the Bernese market, but then I felt the chill around my ankles, too, and began to realise a whole newspaper outfit might be required. It seemed an altogether simpler proposition to tackle the curtains.

But when I placed them on my bed and began to separate them out I discovered that one of them was a cuckoo – quilted, yes, and about the right size and shape, but not the indigo or burgundy of the others, nor the same material. It was red with a broad golden band in the middle. And in the centre of the golden band, not quilted in the usual way, but cut into the top layer of cloth and then folded in and sewn to the next layer down, was a swastika.

It was not the swastika so much as the style of sewing that caught my attention. In the afternoon my mind had been freewheeling around the idea of palimpsests, and in the way of such freewheeling somehow everything that came into my orbit was absorbed into this idea.

What triggered the initial thought was a piece of paper that had been stuck to a letter I was translating, and that was clearly covering up something already written. I realised how much more tantalising this hidden writing was than the writing that had been allowed to stand. But then it seemed to me that this was true of archaeological finds, any kind of research, layers of memory, of landscapes. Then I came across the exquisite scissorings of Myriam Dion. As a partially Swiss sort of a mole, I was raised on what was called the Schärischnitt, intricate cut-outs of rural scenes. They were not really palimpsests – just black paper, usually stuck to a white background, but sometimes hung on windows as some of Myriam Dion’s are too, allowing light to shine through and cast shadow patterns on the surfaces inside.

Dion’s medium is newspapers and her stated concern is with their ephemerality – both their content and their existence as an endangered species. In one exhibition the lacy newspapers hang like net curtains, the tiny parings lying in heaps underneath. In a way this is the opposite of a palimpsest: the images are strangely highlighted, rather than obscured, by the very act of cutting away. The time she spends with, say, a cover page depicting some major event, headlined today, forgotten by the world tomorrow but life changing to all those involved emphasises its import. Painstakingly removing the content gives the stories the gravitas they need but at the same time she has made the papers more fragile, more impermanent.

This cutting away, revealing and the enormous attention to detail seemed to share roots with the cloth I found among Mathilde’s draught excluders.

Something niggled. Uncle Ratty telling me something about the Mole family (he was always a better source than any of the Moles). An ancestor, an engineer, a widower, I think, who had headed off to Panama to advise on the canal. He had a daughter, a bit of a firebrand, inspired by Bolivar, Flora Tristan and the generations that followed. She had, so Uncle Ratty said, renounced the ties to her Papa because of what she called his odious associations with the Panamanian oligarchy and run off to San Blas to join the Kuna fight for independence.

Why did this come to mind? Where had we been? I can just remember being bent over something Uncle Ratty- dusting it off. Ah yes, a well-thumbed copy of Flora Tristan’s Peregrinations of a Pariah. I remember looking at it, opening the flyleaf, seeing the inscription to said firebrand mole from her devoted Papa. When I queried the rift between father and daughter, Uncle Ratty admitted he might have got the story a little wrong, or merged it with the story of one of his own ancestors, because now he came to think of it the Papa had returned to England with the daughter – who had not been dragged, kicking and screaming but had been granted two rooms in the parental burrow to set up a press and shop-front for the influential but short-lived journal (1926-1935) Mole Libera.

Oh Lordy, how my threads get tangled. Where were they taking me? It’s true that Myriam Dion’s delicate pieces foreground different kinds of oppression and disaster, and the plight of those trapped by them, sentiments that might well have inspired firebrand mole, but I knew there was something else. And then it came to me. It was the cloth that the Peregrinations was wrapped in. This was, I now recalled Uncle Ratty telling me, a mola of the kind worn by Kuna women: layered fabric cut into patterns that revealed a different colour depending on the depth of the cut.

And it was just such an intricate form of cutting and stitching that characterised the thin quilt I had found among Mathilde’s draft excluders. I examined it more closely. One of the narrow edges had strong binding with a cord running through it, – and clips either end. This was not a curtain, it was a flag.

It took me on a serpentine peregrination through several encyclopaedias, atlases and history books, but none yielded any information. My luck only turned when I had given up and, because I was already sitting on the floor next to my larger volumes, had begun to browse through the travel section with the vague intention of finding out where San Blas was. And suddenly there, no longer bidden, was a photograph of a bakery, its front vibrant blue, and on its side, hovering over an emerald green landscape, a red and gold flag with a swastika at its centre.

Now that I had a location pin-pointed I could dig with more confidence. In 1925 there had been a revolution in San Blas, the Kuna won independence from Panama and declared the Republic of Tule. The flag was theirs. And the trigger for revolution? Moves to westernise Kuna culture, to stop the wearing of molas.

The swastika is of course an ancient symbol, dating back well over 2000 years; its meaning: the sun or light, but more often everlasting life. It didn’t last long, the Republic – only eleven days.

But the memory of it has.

The draught excluders are still under the desk.

*Links to the artworks and images are indicated in red. 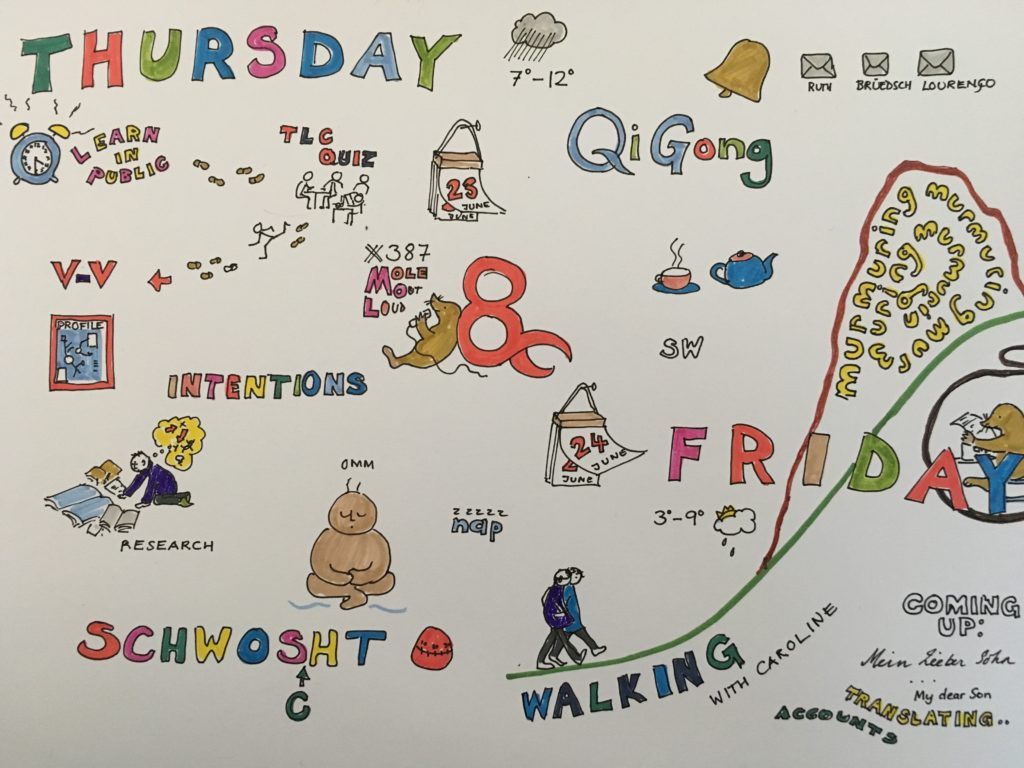 A snug day indoors drawing, researching and brainstorming, and wondering why I no longer want to use my shed. 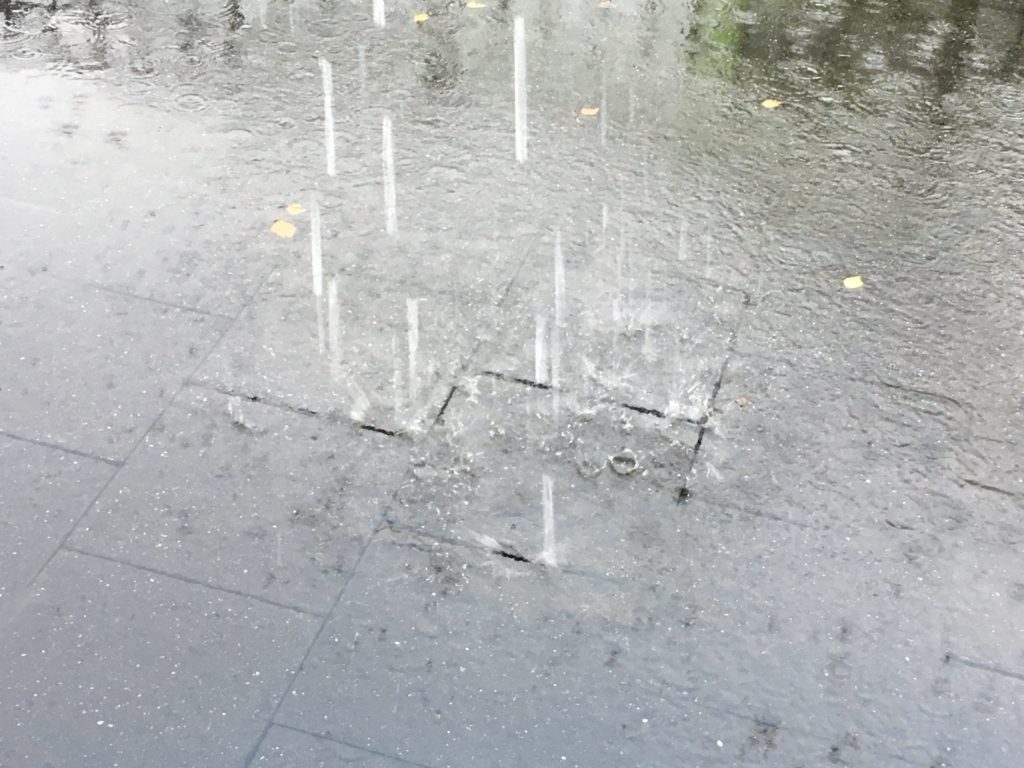 Enjoying this invigorating weather and thinking about the way the act of looking at drawn intentions, rather than written to-do lists, is processed by the right brain and bypasses second thoughts. 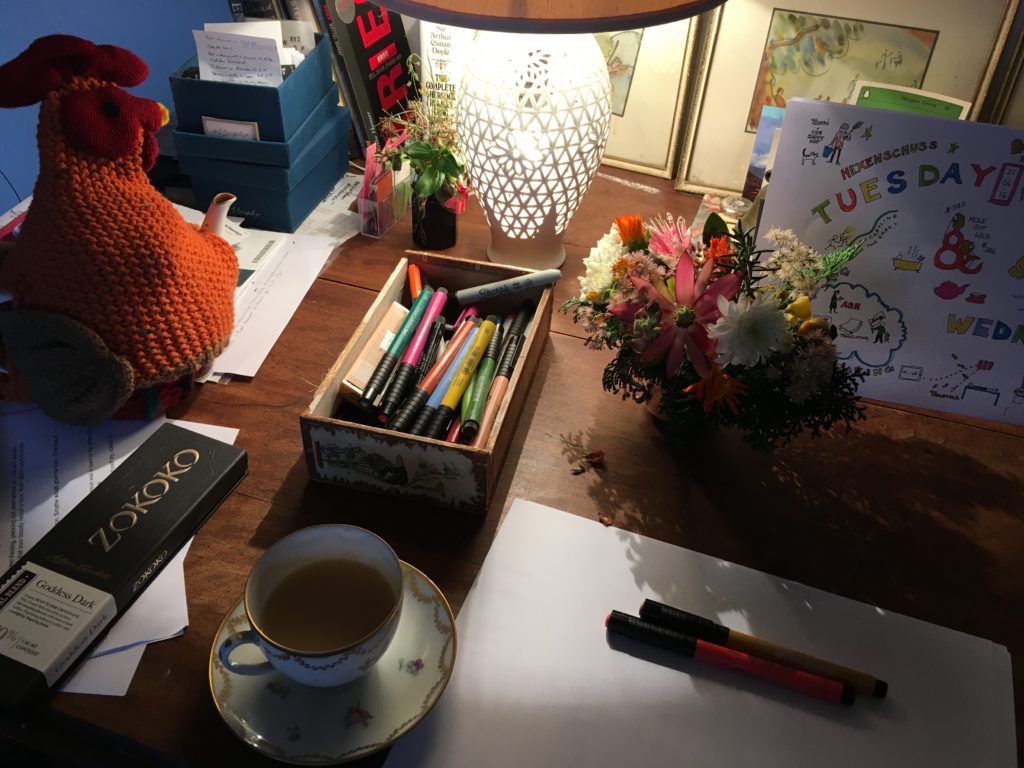 Winter Solstice and a day of total absorbtion. 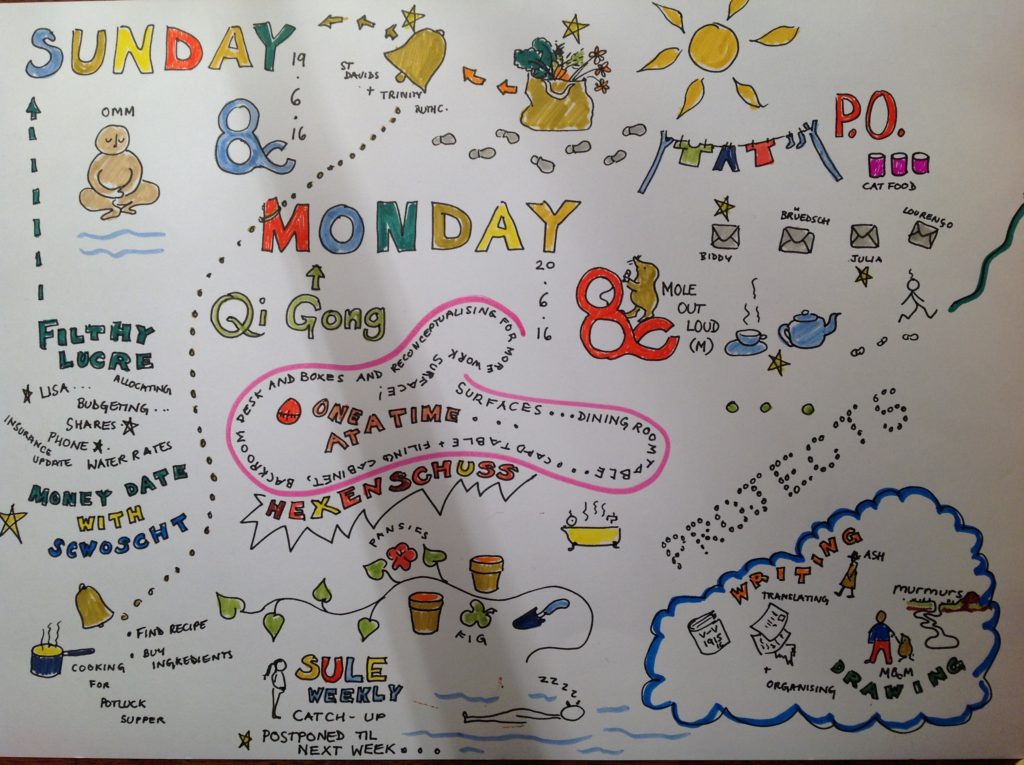 An odd day of waiting and rushing, Qi Gong and a dissatisfied cat.