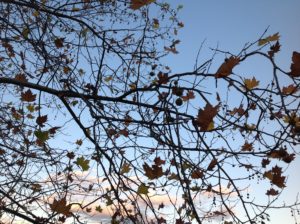 In which I feel a great sense of calmness after a day of Qi Gong that focussed on feeling energy.

Oh what mortification! Last Friday my murmurs launched themselves into the public realm before they had been fully formed. There they were, a jumble of duplications, odd spellings and other nonsense, garbling their way into the gentle minds of my dear readers. A kind chum alerted me, but just as I was poised, paws above keyboard, readying myself to smooth the words into their intended shapes, my doorbell rang. A friend had arrived for tea and then, at the very moment we were farewelling each other, the telephone rang. Three hours passed. All the while my paws itched to get back to the keyboard, and my mind was in a parallel universe of agitated readers struggling to make sense, asking themselves if I had helped myself to Uncle Ratty’s famous cherry firewater before the yardarm. Worst of all, I imagined them turning away in sorrow, never wishing to read murmurs again.

Slapdash, I heard myself saying, or was it my late Mama. ‘Slapdash’ was one her favoured soubriquets for me; that and ‘Bolshie’. Mama’s words were uttered with exasperation but oh, how I secretly savoured them. Slapdash and Bolshie co-habited with haberdashery, cutting a dash, blunderbuss and balderdash in a little chamber of my mind. They were a jolly, rackety, opinionated, swashbuckling devil-may-care bunch. They favoured bright colours, kept late hours, and played fast and loose with rules and regulations. Bolshie earned even greater cachet with the adolescent Moley when, on a clandestine visit, Great Uncle Mole’s cousin, the elderly Mr X, dropped dark hints about his activities in Archangel in 1918. It was unclear whether he was working for the Bolsheviks or the British Secret Service, but it was definitely bad and dangerous if Mr X was to be believed.

John Dryden has been credited with first coming up with ‘slapdash’. In one of his more obscure plays a character called Brain wakes up with a fully formed tune in his head (which is just as well as it has to be performed that very evening): ‘I rose immediately in my Night Gown and Slippers’, he says. ‘Down I put the Notes slap-dash, made Words to ’em like Lightning’.

Now that is the slapdash I want; the kind that happens because inspiration has run away with me and is spilling out so fast that lettering, spelling and sentences are secondary and what matters is getting those thoughts down, however higgelty-pigglety.

Over the years that chamber of buccaneers has fallen ominously silent and the whispers of slapdash and slipshod have rendered this mole paralysed at the point of exposure. Murmurs of Mole began as a way of drawing me out of my hole, committing myself to show my snout from time to time, and to waving a little something for passers-by to read.

Perhaps the garbled words that flung themselves at you last week are a sign that the chamber has reconvened, that their boisterous unconcern for finer detail and their enthusiasm for making themselves heard will, on occasion, burst through the boundaries. Will I be able to resist the force of them? Do I want to? Or shall I join them from time to time, because allowing the slap-dash its head can lead to the wonderful free-fall of words to paper ‘like Lightning’. 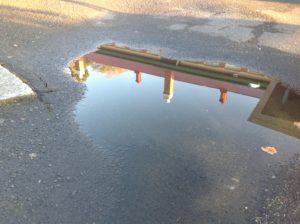 In which I delight in a few showers, get down to work, have to deal with external interruptions and look forward to an annual dinner. 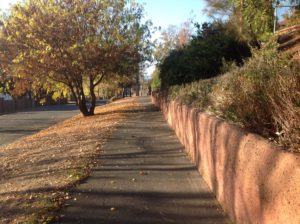 In which I reconsider Mondays as days to prepare the ground for the best possible week. 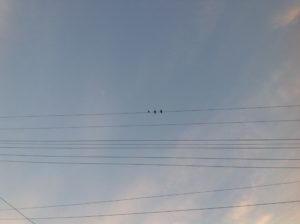 In which I convince myself that a simple overview is just what I need to deal with the complexities of the particular. 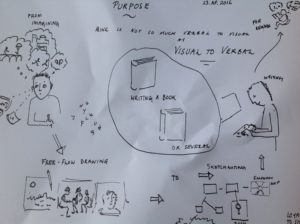 In which I think about how a visual journal would better capture scenarios than a written one, and I try to imagine the visual to verbal process of writing a novel. 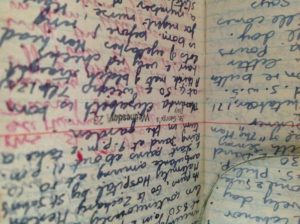 In which I celebrate a low-key birthday and an exquisite autumn day.

The other day a little bird told me she was a pluviophile. Pluvio, I thought. I knew I had come across it recently, written it even. They didn’t teach young moles Latin at my earthy Swiss school so I took the next best route and consulted Great Uncle Mole’s Oxford English Dictionary. Pluvial: belonging to rain. And yes, the niggle of familiarity was the French revolutionary calendar; the Pluviôse its fifth month, the rainy season spanning January and February.

There were several pluvios of one kind or another. It was a word that found its natural home in the 19th century. Cornelius Nicholson, a man with splendid eyebrows and great tufts of white hair either side of his bald dome, doctor of letters, fellow of the Geological Society and the Society of Antiquarians, director the Lancaster and Carlisle Railway, sometime mayor of Kendal, wrote of the butter-women in his district being ‘exposed to the pluvial elements’ in 1832. The irascible and controversial Orientalist and translator of Arabian Nights, Richard Burton, was never one to hide his erudition, even when describing the simplest journey. ‘Irritated by the pertinacious perniciousness of Pluvian Jove’, he wrote of one wet day when he was traveling along the west coast of India sometime around 1850. I should give him the benefit of the doubt. It may have been the monsoon. Across the Atlantic some forty years on the poet James Russell Lowe wrote of the ‘artificial pluviosity of the gardener’s watering pot’. But after that the etymology of the word more or less falls out of usage.

At least … Something about Great Uncle Mole’s barometer is tickling my mind. Yes, there were other weather-measuring instruments that had belonged to his Mama and Papa (known as Gamm and Gump among my generation). When Great Uncle Mole had barely been breeched they had all spent a stint as weather-watchers in the Bernese Alps. One of the instruments had been a pluviometer, a sort of funnel and cylinder. Gump was quite obsessive about reading and recording the rainfall, even when he was in his dotage. Maybe pluviophilia is in my genes.

There was no mention of a pluviophile in the old OED. Perhaps it has been driven to germinate by this everlasting dry season. What used to be the lawn, the lovely lush green-ness you see me wading through above, is now just cracked earth. It was only days after that photoshoot in early February that it was mown down. Once the mature blades of grass had gone, all that was left was dead undergrowth.

Pluviophile. Saying it aloud makes me sigh with the deep contentment of a mole who is at one with its true nature. I say it slowly. It has a spacious, melodic, watery sound to it. Even if the word does not have the authority of the dictionary, it has come into usage, and so this true nature of mine is recognised by others, experienced by others, even. I am not the the only pluviophile in the world. There is the little bird who declared herself to me for one.

As I’ve been writing I have heard a strange sound, a sort of light tapping on the tin roof of my shed. I sit on the stoop so that I can smell it, too. Drops of rain. Not many, but its a start. And the birds are chirping, too. 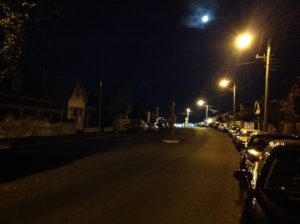 How the night walk changed my mood and gentled me into a creative day. 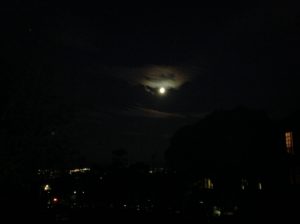 In which I anticipate a little nightwalk to lift myself from the Eyoreishness that tends to precede birthdays and other celebrations.