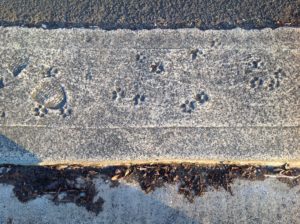 A beautiful day during which I deviate from my intentions and find enlightenment. 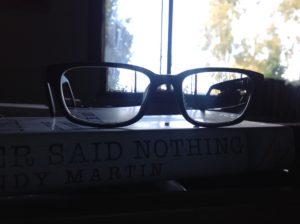 In which I talk about a couple of bed days interspersed with some enjoyable forays into the outside world. 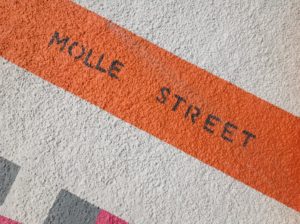 In which I counter sleepiness induced by a very early start by meeting a writing friend for a cup of tea – and I talk about using my whiteboard image as a trigger for discussion.

Sundays always drew to a close in the same way at Great Uncle Mole’s burrow. At least in the winter they did. Or perhaps I only remember them as so. After a late lunch and an interlude timed by a pipe and a crossword, we’d set off for a bracing walk, buffeted by Siberian winds, our snouts stinging with sleet or hail, and our poor paws numb and blue. Two hours later, sometimes three we were back in front of the fire, toasting crumpets and drinking hot cocoa. Afterwards, Uncle Ratty read to us from the Adventures of Sherlock Holmes or Saki. Great Uncle Mole left us to it and went off to run his bath. We would not see him again until Monday morning.

But we heard him. First the gushing taps, then the music. His gramophone sat on a shelf just outside the bathroom door. As soon as the taps were turned off, we heard the scratch as the needle touched the record, and then – you never knew quite what: Bartok, Fats Waller, Scott Jopli. You could trace Great Uncle Mole’s wet pawprints on the wooden boards in the passage between the bathroom door and the gramophone.

Uncle Mole’s Sunday night bath was a sacred ritual. The preparations began earlier when one of us, scuttle in paw, was given the task of going deep into the labyrinthine tunnels of the nether burrow to the coal cellar. But after that, responsibility was handed over to Uncle Ratty who was the only one allowed near the boiler, a great cast iron thing that spat sparks when you opened its door.

As a small mole I was envious. Not that we didn’t have baths too, but they were a quick in and out so that the water would still be hot for the next in line. Great Uncle Mole had his all to himself.

Now that I am an older mole I have incorporated the ritual as my own. I anticipate it all Sunday, and in the evening I put some music on, sometimes Great Uncle Mole’s favourites. I find myself a book, turn the taps on full pelt and pour in generous doses of Epsom salts. Always. Or at least when the weather has become cooler as it is now. This is what I did last Sunday night.

But the bathwater was stoney cold.

One winter a similar disaster struck at Great Uncle Mole’s; not so much that the water was cold, but that there was no water at all. Turn the taps as far as they would go – not a droplet. Frozen pipes you might think, but no. The water that was not in the bath had composed itself into a middle-sized lake on the kitchen floor.

I had never seen a mole quite so out of sorts as Great Uncle Mole was then. He drooped in his dressing gown and slippers; clutched his spongebag as if it might provide spiritual solace. Uncle Ratty sat him in his armchair next to the fire and corralled me into a rescue operation with towels and buckets.

It was a while before we could get hold of a new tank. Uncle Ratty brought up his old copper samovar and for the next week or so we washed in the steaming pine-cone smokey water boiled up in it.

When I faced my stoney cold bath last Sunday night I could feel Great Uncle Mole’s desolation and rather wished I had Uncle Ratty nearby.

I shrank my requirements. I had no samovar but boiled a kettle, and then another. And I remembered my late Mama telling me how the sound of the kettle coming to the boil had soothed me to sleep. It still soothes me.

And is there anything as wonderful as a bath after being without hot water for a week? 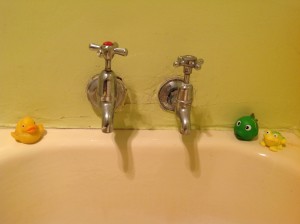 In which I contemplate the clouds and look forward to a bath after five days without hot water. 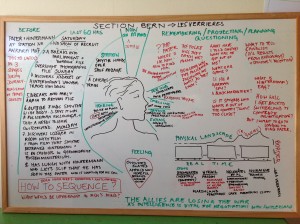 In which I dust off the whiteboard and map out my protagonist’s immediate past and imminent future. 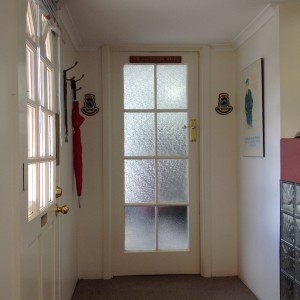 Waiting for the accountant.

In which I confess my telephobia and celebrate stepping out of my comfort zone. 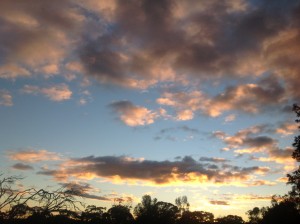 In which I reflect on my sabbatical and talk about how listening to discussion with John Le Carré gave me food for thought about honing down expectations I have of myself. 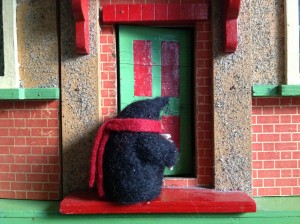 In which I contemplate being able to take a step back during my upcoming sabbatical.

I dreamt of Great Aunt Septima last night. It had been years since I last thought about her. The details of my dream evaporated when I woke up, but the reason she manifested was, I think, prosaic; I had been reading Agatha Christie’s The Seven Dials Mystery before I nodded off. But I also think she was the manifestation of some subterranean mulling I had been doing, and that she held the answer in her paws.

I’m not sure if I have mentioned my Great Aunt Septima to you before; if I haven’t it may be because Great Uncle Mole had a great many siblings, almost all older than he and several, alas, had perished by the time I was born. But I did once have occasion not only to visit Great Aunt Septima, but to stay with her. I was eight at the time.

When I was quite a bit older Great Uncle Mole told me that according to family lore, this particular sister, oddly positioned about half way between a batch of older siblings and a batch of younger ones, extracted herself from the hurly burly collectivity of the brood and grew herself up in her own very particular way.

She came to believe that she had been somehow chosen, that her name had not just been a convenient moniker picked for their seventh child by unimaginative and exhausted parents, but rather a sign from the heavens.

It was accident that I came to be staying with her. Mama and Papa, who both worked in some hush-hush field, had been urgently called up on some mission or other. Great Aunt Septima was the only relation we knew in London and so it was on her doorstep in Seven Dials that we we landed. My first impression was that her eyes were both sharp and glazed, and that she was a very old mole indeedMama explained their predicament. Great Aunt Septima asked how old I was. ‘Seven’, my parents answered in unison. Mama placed her paw in front of my snout lest I should squeak out ‘eight’, and Great Aunt Septima decided that was propitious. ‘Seven days’, she said. ‘No more, no less.’

No-one had warned me. The burrow was a Wunderkammer of all things seven. It was crammed. Multiples of seven were favoured, from doorstops and hot water bottles to places laid at the table. The walls and ceilings were painted with depictions of the Seven Heavens. On the back of my bedroom door hung a page torn from a 1925 edition of Mahatma Ghandi’s Young India with a list of the Seven Social Sins:

Wealth without work.
Pleasure without conscience.
Knowledge without character.
Commerce without morality.
Science without humanity.
Worship without sacrifice.
Politics without principle.

My seven days were filled with instruction.

‘Your soul, young Moley, is made up of seven senses, each influenced by one of the planets. Fire is what animates you, earth gives you physical sensation, your voice comes from water, with air you can relish the food before you, the mist gives you vision, flowers allow you to hear, and the southern wind endows you with the power to smell.’

And then there were the seven stages of mole. I was transitioning, she said, into a personality of my own. I knew of course that I was not transitioning but was firmly in the next stage already. ‘The Romans tell us that the Soul rejuvenates every seven years’.

She taught me to cross my 7s, which gave the digit proper substance, she said. She’d learnt this in Königsberg while investigating the seven bridges that had provided Euler with the seeds of his graph theory (this was a bit beyond me but she gave me a map of the city so that I could see for myself whether I could find a route only crossing each bridge once). I wondered whether Königsberg was as rackety as Seven Dials.

If my mind appeared to wander she would slap a Tarot card in front of me – always the 7th card, the chariot, which she told me symbolised the need to focus, and if it wandered for longer she would reverse it. ‘That’, she would say, ‘points to an inability to see things through.’ When I was being attentive she told me I had the Chinese lucky number seven which meant I would grow to pursue a subject until I got to the heart of a matter. ‘But’, she warned, ‘some lucky sevens are too afraid to accept the truth when they discover it.’

On the Seventh day my bags were packed, and my Papa, looking distracted and slightly flushed from running, turned up on the dot of 7pm, to pick me up.

Would I see Great Aunt Septima again? No, she had done what she could to implant my sevenness. Now I would be on my own. Then she relented. I could, if I liked, come again when I was fourteen. I did keep in touch with her, a letter or two each year. Hers to me were always headed ‘7 Seven Dials’ (although it was not exactly true), and dated 7th September, no matter when they were sent. But when the time came for me to visit her again she had died, and besides, I had other fish to fry.

Apart from reading The Seven Dials Mystery, before I nodded off, I had been mulling about how I seemed to be making little distinction between my days, and wondering how to create a bit of a rhythm, time on and time off, time for one project or another.

Seven. That was it. Every seventh week I shall take a sabbatical. On those weeks mole will be silent – no podcasts, not even a murmur.

A sabbatical promises time away from the general scheme of things, time to explore or focus on something in depth; time to look at the sky as the ideas loosely construe in my mind.

I shall begin my first sabbatical tomorrow evening.