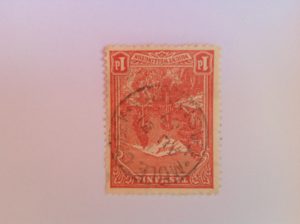 A rather short night and a week of unexpected pleasures.

A few days ago I dreamt that a friend had given me a volcano for my birthday. It wasn’t a huge volcano, it was contained in a leather pouch and its base measured roughly the embrace of the trunk of a fifty year-old oak tree. He placed it on a low table and it ignited.

What did this all mean?

In my youth I was a wheezy runt of a mole and spent as much time in bed as at school. My curriculum was interrupted but my learning expanded. I was exposed to stamps; those of Mama and those of Great Uncle Mole. They were both very methodical. Their stamps were arranged alphabetically by country and chronologically within it. Their albums were uniform dark green cloth and neatly labelled. When I was with Mama we sat with atlases and books of plants and dynastic charts. When I was with Uncle Mole we concentrated more on ink types and perforations and how many had been issued and where they had been printed. Some of Great Uncle Mole’s stamps were extremely rare and he didn’t care for me looking at them when he wasn’t there because I couldn’t be trusted not to splutter on them.

But once, – I must have been convalescing and mooching around the burrow while Great Uncle Mole was working, I came across an album I had never seen before. It was quite unlike the others, rather home-made and covered with a winey-coloured carpety material, something that might have once been a saddlebag for a camel. I took it to the snuggery and settled myself in.

‘For my dear, dear Mole, with heartfelt wishes for your birthday from your ever-wandering but devoted Ratty, 1937′, was enscribed inside the front cover.

Uncle Ratty had used stamps to decorate the borders of each page, by motif or colour. On one page, for instance, he had alternated blue and yellow. A Mauritian tuppenny blue and a common-ol’-garden Helvetia 10 centime William Tell might sandwich something that looked suspiciously like a Treskilling yellow. Where a stamp didn’t quite fit he’d trimmed it.

Volcanoes, I hear you ask. What has this to do with volcanoes?

Well, the fact is that this album was almost entirely dedicated to volcanoes. It was philatelic, so Uncle Ratty told me later, inasmuch as he wanted to make Mole something with stamps, because stamps were Great Uncle Mole’s passion. But of course being Uncle Ratty, he couldn’t help but gather and enlarge and express with great, even volcanic, effusion. The theme overtook the medium. Words and labels, photographs and daubs of paint exploded onto the pages and beyond them, too, no doubt.

Oh there were stamps, too, lots of them. They had become jumping off points for musings factual and fictional. There was the famous stamp of the active Momotombo which had been sent to American politicians and scared them out of building an Atlantic/Pacific canal through Nicaragua. Uncle Ratty had added news cuttings, some volcanic ash in a small envelope, and a photograph of an old man who’d told him how Momomtombo had roared and trembled every time a Spanish priest set foot on it when the Aztecs were under the thumb of the Conquistadors.

Another page was pasted with illustrations of Le Petit Prince standing on his tiny planet Asteroid B-6-12. In amongst them Salvadoran stamps of Izalco (active for so long it was nick-named the Lighthouse of the Pacific) were stuck willy-nilly. Izalco was one of the three volcanoes shown on Asteroid B-6-12 a tribute, so Uncle Ratty had written, of Saint Exupéry’s to his Salvadoren wife.

He ran out of time and shanghaied his sister and mother. This he told me much later when I asked him about the different handwriting.

Celestine, his firebrand sister, had stuck in a lithograph of Auguste Desperret’s Le Volcan Liberté, the letters L I B E R T E spewing out as magma. The print all but dwarfed the 2 Kronor Icelandic stamp depicting Laki whose eruption in 1873-4 had so changed the climate that the ensuing chaos and crop failure far away was said to have ignited the French Revolution. And had Celestine kept the Belgian paraffin impregnated matches whose label showing Vesuvius she had added to another page.

It was on this page that a piece of rice-paper had clearly been stuck over something to conceal it. The paste had come loose – or maybe I prised it loose with a curious claw. I found, in Celestine’s hand, a gruesomely detailed account of Romans flinging live rats and moles into a sacrificial bonfire. Perhaps Uncle Ratty thought it a bit rich for Great Uncle Mole’s birthday.

But what I am most trying to remember now are the contributions of Uncle Ratty’s mother who was said to be a very wise rat, and fey to boot.

She had used every little space on a page dominated by labels extracted from Kee Chong Hong’s Volcano Super-Charged Firecrackers. Her writing was minuscule. It curved around the round letters of the labels and sideways up their sides. There was little sequencing, more a collage of impressions. And so that is how they come to me now, as impressions. The volcano symbolising the elements: earth as safety and deep knowledge; fire as passion, power and creative force; liquid flowing, unstoppable, bypassing resistance; and air, the giving of voice, broadcasting.

A volcano, shuddering and smouldering underground, can be a pretty scary proposition for a mole. Surfacing even more so. But the layers of volcanic soil that ensue are rich and rewarding.

Plenty to mull on. 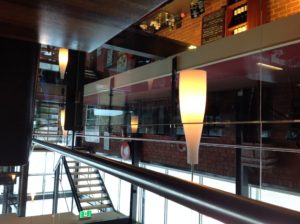 In which I prepare to set out into the blustery windy afternoon to meet my novel-writing group. 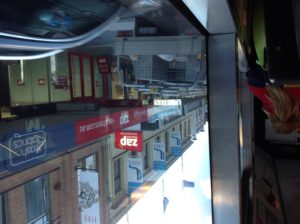 A blustery day and spending some time on writing important letters. 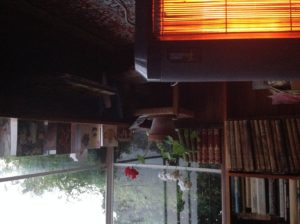 A drawing in kind of day, reducing and reflecting. 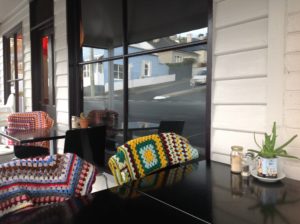 A gentle Monday translating letters and thinking about an elimination diet for my projects. 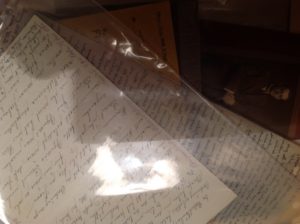 A topsy-turvy day which culminates in an exciting archive.

This last week has been one of recalibrating.

It all started when I took it into my head that I wanted to make a pie and began rootling about in the cellar in search of my late Mama’s old pie blackbird, – the kind that opens its beak to the sky to let the steam out. I was soon standing paw deep in wood-shavings, whole tea-sets stacked by my side; candlesticks, plate warmers, parachute silk, vases, napkin rings and tureens, to boot. Any sensible mole would have given up at that point and used an upside-down egg-cup instead, but the pie had ceased to be important, the quest all-consuming. I was about two-thirds of the way into the tea-chest when I felt something larger. There was something familiar about it, but I didn’t recognise what it was until I tried to lift it and couldn’t.

The thing at the bottom of the chest was Great Uncle Mole’s Ekco wireless. It is a beautiful object, the chassis shaped like a chocolate cake on its side, but rounded and smoothed – moulded in brown bakelite. The speaker cloth, patterned with textured triangles, stretches across a circle in the centre. Orbiting this, a dial indicates the wavelengths and once, but sadly no longer, an illuminated cursor backlit the stations as the knob was turned: Reykjavik, Oslo, Kalundborg, Luxemburg, Berlin, Ankara, Moscow.

I would watch him twiddle the knobs, refining the scratchy hiss backwards and forwards, coaxing a voice into clear articulation. He called it calibrating. I can still hear him pronouncing the word to me in his husky growl, slowly, allowing me to learn each syllable so that I could put it together as a whole: ca-lib-ra-ting.

Calibrating. I had forgotten about it, especially Uncle Ratty’s insistence that it wasn’t just wirelesses that needed to be calibrated, that we must not forget to calibrate ourselves.

I do. I forget to calibrate myself all the time.

But this week fate has engineered my life into a convergence of events conducive to calibration.

It is a rare thing for this mole to find the kind of deep stillness that allows for true listening, but it was granted to me with a day of Qi Gong in the ferny foothills of Kunanyi. The spaciousness of that listening stillness is an essential prerequisite for calibration and it was strong enough to carry me through the week. It carried over into the way I experienced my time with a writerly chum I hadn’t seen for several years. The expanse of time between then and now allowed me to calibrate temporally over a longer time. Instead of despairing at my muddling slowness I could see the distance travelled. The bumps and deviations in the middle disappeared and the distance travelled become apparent. Our conversation looped into shared passions I had forgotten, the quickening of the heart when an archival trail becomes hot, the interweaving of history and imagination, intellect and storytelling. It raised knob-twiddling questions. Am I doing what is closest to the clear articulation of my moleyself? Am I in alignment with my station now? Do I know what that station is? Am I moving through the dial to the wavelength I wish to reach, or am I floundering around Reykjavik when Moscow might be my truer destination?

Two boosters followed my day under Kunanyi. I joined my tribe at Hawarden in North Wales for virtual Qi Gong. We calibrated body, mind and breath, rocked ourselves backwards and forwards, the past and future until we found our centres and collected all our energy to focus on the present. In the background the neo gothic edifice of Gladstone’s Library glowed and reminded me of annual excursions with Great Uncle Mole and Uncle Ratty in their unreliable Morris Minor. The destination was Malmesbury in Wiltshire. We would picnic there in the overgrown grounds of Cowbridge House and then fossick around for ruins under the ivy. Great Uncle Mole had something to do with hush-hush work here in the war; something to do with radar, although no-one would say much more. Ekco came into it, too, somehow, but I can’t quite remember the connection between Cowbridge and the bakelite set back in the burrow parlour, – or the second one for that matter, the short-wave one he kept locked in a cupboard in his study and the key on a string around his neck, or so a cousin told me.

I stroked the smooth surface of the wireless, turned it around and looked more closely. There was some writing on the backing. I shone a torch on it to see if I could make it out. I found not the name of a retailer, repairer nor even of Great Uncle Mole. In my late Mama’s careful script, I read her name and the address of her Cairo posting. It was, I was sure, not only the same make but the same model as Great Uncle Mole’s wireless, but it was not his. I shouldn’t have been surprised, given that I found it in Mama’s crockery chest.

I assumed too much. Memory, too, needs recalibrating from time to time.

As I eased the wireless back back into its sawdust bedding, I felt a small lump. My torch shone into the open beak of a blackbird but it was much too late to think of baking a pie. 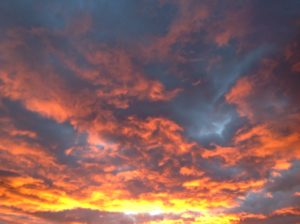 In which a glorious sunrise launches me into the day and sketchnoting around the novel puts me in the right zone for writing.

For Doug Neill’s sketchnoting of the interview between Chase Jarvis and Marie Forleo see: https://www.facebook.com/hashtag/30daysofgenius 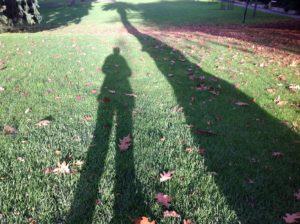 Which I record crouching in St David’s Park and talk about long -term self-assessment.